IN A DARK NEW REALITY,
TIME IS ALWAYS RUNNING OUT! 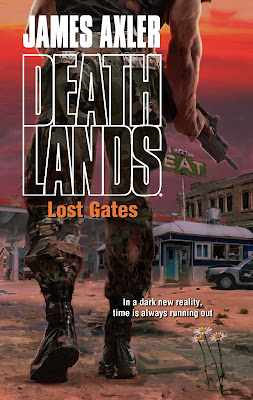 Ryan touched the wires together
The jolt of electricity made him gasp, and he was thrown backward with a blinding flash of light. The door squealed as the twisted metal tried to move in the straight grooves of the frame.
“Fireblast! I didn’t expect it to hurt like that,” Ryan groaned as he scrambled to his feet. Then he followed
Jak’s gaze.
A thin trickle of water was visible, running faster and then furiously down the crack between the two doors.
Without warning, a high-pressure stream of water shot through the gap and caught Ryan in the ribs. The force threw him against the wall of the corridor, and for a moment light exploded around his head.
Then it went black.
Available November 2011 wherever books are sold!
at 12:39 PM