A deadly cult goes on a killing spree in Detroit 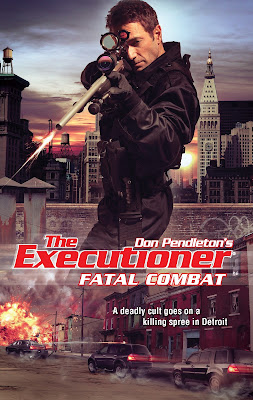 The Executioner charged from the car, a gun in each hand
To survive against such overwhelming odds required movement—he would have to run the risk of seeking higher ground.
Holstering the Desert Eagle but keeping hold of his Beretta, Bolan grabbed the mirror extending from the rear corner of the van and pulled himself to the roof of the vehicle, flattening himself against it.
The gunmen would have his range in seconds. He drew his Desert Eagle once more, extended his arms out to each side, and began shooting from the roof of the van. The fusillade pinned the gunmen nearest to the van, striking and wounding some of them, killing still others. But there were more assassins than the soldier had realized.
The cargo van shook beneath him. Men were climbing inside. They would no doubt try to shoot him through the roof.
Bolan beat them to it. Holstering the Beretta and swapping magazines in the Desert Eagle, he aimed at the roof of the van and started pulling the trigger, walking the shots in an ever-widening pattern. Men screamed below him as bodies hit the floor of the vehicle.
He flattened himself again and spun around, shooting left and right, taking running gunmen this way and that.
It was time to move.
Available November 2011 wherever books are sold!
at 12:34 PM

Good day I am so excited I found your site, I really found you by mistake, while I was looking on Bing for something else,
Regardless I am here now and would just like to say thank you
for a remarkable post and a all round entertaining blog (I also love the theme/design), I don't have time to browse it all at the minute but I have book-marked it and also added your RSS feeds, so when I have time I will be back to read more, Please do keep up the great job.
Here is my webpage :: free porn

Usually I do not learn post on blogs, but I would like to say that this write-up very forced me to take a look at and
do so! Your writing style has been amazed me. Thanks, very great article.
my site :: nude girls