Earth's saviors are on the run, as more
nightmares descend upon them! 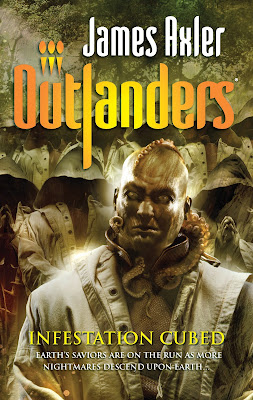 “Quiet, you two!” Kane bellowed. “We’ve got worse things to worry about than your petty little paranoia.”
Kane pointed to one of the unconscious hooded men. He knelt and tore the man’s cowl back, revealing a dark, meshlike covering that, in the shadow of the hood, would render the upper part of his face above his lips completely invisible. It was a cheap effort that produced an unnerving effect, and Kane himself had experienced a momentary pause as he was dealing with the shadow-faced opponents. Only encounters with equally weird and terrifying opponents had given him the ability to act despite the distracting nature of their appearance.
“That doesn’t look right, even with that cloth over his head,” Demothi said.
Kane reached out and took a handful of the meshy sack and tore it off the unconscious man. It was soaked through, which was strange as he had fallen on dry ground. But as he tugged, stringy mucus stretched between the fabric and gangrenous gray tumors that ringed his skull, the tumors themselves riddled with wires and circuits. The downed man wasn’t bleeding from his head trauma, but the crushed growths where he’d been struck were oozing translucent yellow pus that seeped into the grass under his head.
“What... Oh, God,” Suwanee began. She clamped her hand over her mouth, trying to fight off the urge to vomit.
Available November 2011 wherever books are sold!
at 12:30 PM